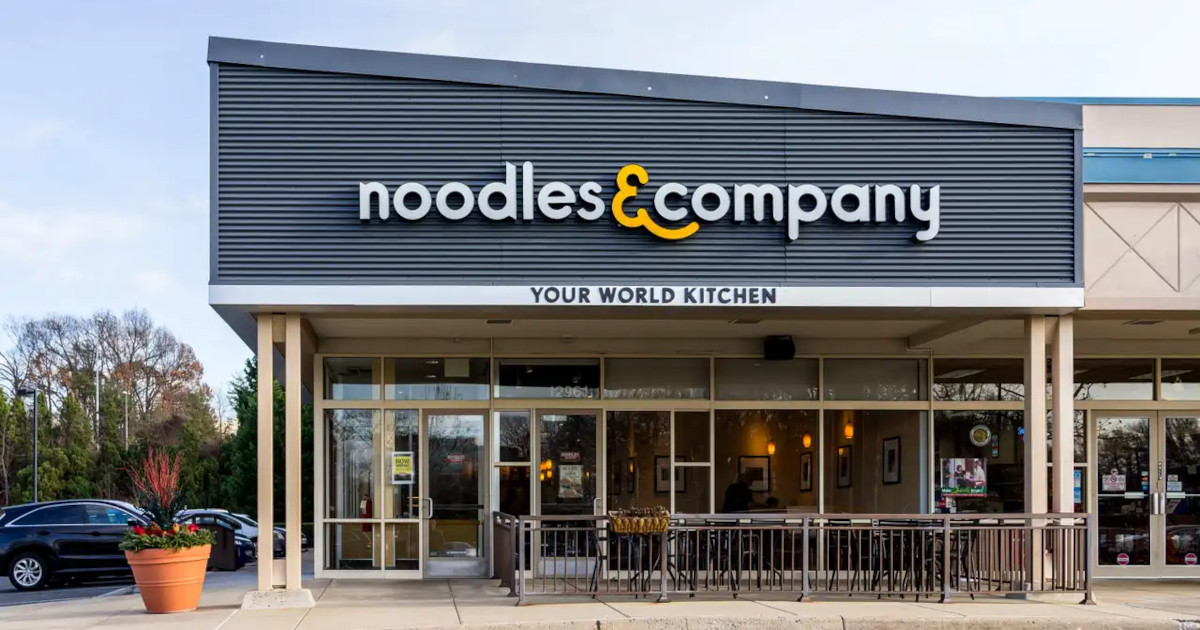 One of the hardest-hit industries has been the restaurant space, which isn’t surprising given that restaurant brands have had to deal with rising food costs and rising wages to properly stock and staff their restaurants.

However, with inflation seemingly peaking this fall, we’ve seen a dramatic recovery in many restaurant names.

Restaurant Brands International (QSR) is one example, up nearly 50% from its 2022 lows on the back of strong results and the appointment of a new CEO, Patrick Doyle.

However, while large-cap restaurant brands have been bid up nicely and clawed back year-to-date losses, the small-cap names have been largely ignored.

This is likely because fund and portfolio managers go where the liquidity is first, and they often ignore sub $500MM market cap names altogether unless there is a dearth of deals in the mid-cap and large-cap space.

One name that has suffered from this preference for more liquid names is Noodles & Company (NDLS), a smaller restaurant brand that is aggressively growing its store count with considerable whitespace long-term.

Too Cheap To Ignore

Noodles & Company is a $250MM company in the restaurant space with nearly 500 restaurants across the United States.

As its name suggests, Noodles & Company specializes in noodle dishes and does so at a value price, with offerings including Japanese Noodles, Spaghetti & Meatballs, Wisconsin Mac & Cheese, Pesto Cavatappi, and many other options.

While pasta is known for being high-carb and less desirable to some more health-conscious consumers, the company has multiple healthy options, including pasta salads, zucchini noodles, and its new cauliflower gnocchi (a huge hit since its release).

While the company has continued to grow its restaurant base since its IPO debut in 2013, the stock has performed very poorly.

There are certainly more attractive growth stories out there and the negative press the company received several years ago as two employees (since fired) refused to serve a Virginia police officer did not help.

This news has long been forgotten, but it led to a temporary contraction in sales, which couldn’t have occurred at a worse time as NDLS was aggressively growing its store base.

The result was that the company had to close some underperforming stores and rationalize its store count, resulting in a sharp decline in its store count from 2016 to 2021 after a year of nearly double-digit growth in its third year as a public company (2016).

The good news is that this downtrend in the store count has finally ended. NDLS’s store count saw a trough at 448 in 2021 and is expected to hit a new all-time high of 560 by 2024.

This turnaround is based on a pick-up in franchise agreements related to improving average unit volumes.

So, with steadily growing AUVs despite a pullback in consumer spending and a sharp increase in its unit count on deck, I expect a significant improvement in annual EPS looking out to FY2024.

The problem for NDLS though, was that its turnaround story was interrupted by general market weakness and its margins briefly came under pressure due to rising food costs and a tight labor market.

However, while this has delayed its turnaround, it hasn’t prevented it from occurring, and NDLS actually reported record revenue in its most recent quarter of $131.1MM.

Given that I expect that we have seen peak food costs as of Q3 2022 as inflation moderates, I would expect the stock to recover sharply with the negative sentiment surrounding the industry in the rear-view mirror and NDLS being one of the most undervalued names in the group.

It’s worth noting that NDLS may have a lower growth rate than Dutch Bros, but it is still expected to grow its store count by 20% between 2022 and 2025, which should command a multiple closer to 18-20.

The kicker to the story is that at the same time that NDLS is steadily growing its store count and returning to growth, it should see healthy margin expansion.

This is because food costs are moderating, and it’s slowly seeing the benefit of investing for the past two years in efficiencies to help claw back any lost margins.

The result is that NDLS should grow annual EPS from a net loss this year to $0.42 in FY2023 and $0.50 in FY2024, and when stocks see record annual EPS, the share price often follows to the upside.

So, with NDLS in the doldrums, I don’t expect this weakness to persist much longer.

At first glance, NDLS’s technical picture might leave much to be desired, with the stock trying to reclaim its 200-day moving average last month and failing.

However, the stock appears to be finding support at previous resistance near the $5.10 level, a sticky spot for the stock through September and October.

This change of character with prior resistance looking to be morphing into new support is a positive development, as is the fact that the stock has reclaimed its 20-week moving average.

Hence, it might be time for a new bullish stock cycle to begin after a brutal 9-month correction of 68% with multiple failed cycles along the way.

Given that we appear to be seeing a cool-off in food costs and a lower rate of wage inflation, this should be very positive for NDLS, which has seen margin compression due to the rising costs.

So, with NDLS in a long-term oversold position, ignored by the market due to its low market cap, and heavily out of favor, I see the potential for a strong rebound into what’s likely to be softer inflation readings in January and February.

Based on what I believe to be a conservative earnings multiple for NDLS of 20 (historical average: 38) and FY2023 annual EPS estimates of $0.42, I see a fair value for NDLS of $8.40 to its 18-month target price. This represents a 53% upside from current levels.

However, I see a path to $0.55 – $0.60 in annual EPS by 2026 as Noodles continues to aggressively grow its store base and benefits from trading down with its healthy value menu that offers considerably more value than names like Chipotle (CMG) that have raised prices aggressively over the past year.

So, with a long-term earnings potential of $0.60 and even a conservative earnings multiple of 20, this stock could deliver more than 100% upside over the next few years for patient investors.

Having said that, this is a speculative name in the small-cap space ($250MM market cap), so if I start a new position on a pullback, I will be sizing that position conservatively.

Disclosure: I am long QSR

The above analysis of Noodles & Company (NDLS) was provided by financial writer Taylor Dart. Taylor Dart is not a Registered Investment Advisor or Financial Planner. This writing is for informational purposes only. It does not constitute an offer to sell, a solicitation to buy, or a recommendation regarding any securities transaction. The information contained in this writing should not be construed as financial or investment advice on any subject matter. Taylor Dart expressly disclaims all liability in respect to actions taken based on any or all of the information on this writing.

Is Noodles & Company (NDLS) A Buy or Sell?

Based on MarketClub’s technical analysis tools, Noodles & Company (NDLS) is moving in a sideways pattern and is unable to gain momentum in either direction. Beware of choppy movement and consider a sidelines position until a stronger trend is identified.

Get an alert when NDLS triggers a new signal and analysis for over 350K markets with a 30-day MarketClub trial.